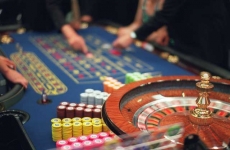 More than a game of chance, roulette is the very symbol of the casino. Passing through the ages without losing a wrinkle, it has challenged us for over two centuries. Making chance like other machines making tools or preserves, it turns, turns in total indifference to meet this malicious little ivory ball carrying all our hopes. The device is very simple and yet the paths of chance that it generates remain difficult to penetrate. Starting from the same device (the cylinder and the ball), roulette offers us a whole range of ways to meet the random. Full, horses, cross, squares, red, black, etc ..., are as many opportunities left to the players in search of fortune. Here, no favorites, no outsiders. Each chance offered on the mat has its odds and the odds are the same for all players. Lovers of big reports, the horses and the full ones will allow you to multiply your bet by 17 or 35. Careful players, the columns, the dozen and the simple chances will allow you to put a large number of numbers on your side. In fact, any player, novice or experienced, will always find a possibility of play that suits him in roulette. Both from the temperament point of view and from the financial point of view. This is why roulette is called Queen of Casinos and that a lot of water will still flow under the bridge before it loses this title ...

Roulette is perhaps still the undisputed queen of casino rooms, but it has suffered since its birth the assaults of hundreds of mathematicians, researchers, calculators, system makers, later computer scientists and logicians. It remains difficult to beat but it retreats, gives ground. If a certain number of methods, elaborated for a long time gave rise to great hopes in their authors ... before being negative, others have reported to their inventors fame and fortune (Garcia, Wells, Winkel, Jarecky, Sadia, Marigny de Grilleau among others). However, know this and think about it, studying and testing many methods allow us to affirm that if roulette is undefeated, it is certainly not invincible!

Blaise Pascal is sometimes credited with the invention of roulette. This idea is false but excusable, since on the one hand, Pascal is one of the creators of calculating probabilities and, on the other hand, he has written two books on roulette! Now he meant by that, not the game of roulette but a geometric curve, called since cycloid, and which we get an idea by thinking of the trajectory described by the valve cap of a bicycle, during the movement of this one.

In Greco-Roman antiquity, there were already games which mimicked chariot races by means of colored marbles rolling in an enclosed space. The first edition of Diderot's encyclopedia gives a description of roulette but without naming the inventor of this game. 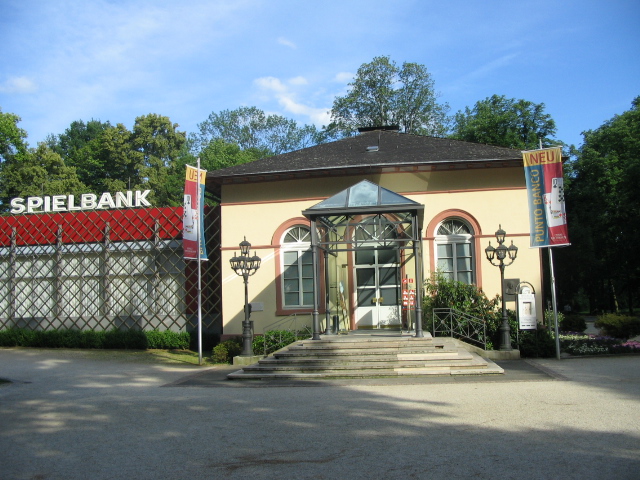 It was in 1760 that the game of roulette was officially introduced in Paris by Sartines, lieutenant of police to moralize games of chance. As Eaon Cesar Corti writes in the Magician of Monaco (Stock 1933), roulette has the great advantage of excluding any arbitrary intervention in the running of the game. The ivory ball chooses unpredictable paths and more than one obstacle turns her out of her way before she comes to stay in one of the 38 numbered boxes (36 numbers plus 2 zeros). Single zero roulette was invented and launched in 1841 by brothers François and Louis Blanc, then owners of the casino in Bad Homburg in Germany. Since that date, the cylinder, the carpet and the rules of the game of roulette have not changed. At most, we have imagined a few variants.

The different types of roulette

There are 3 types of roulette: 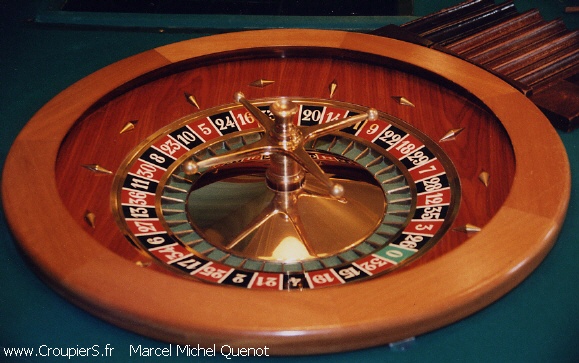 The caster is formed by a wooden cylinder, the bottom of which consists of a metal disc rotating on an axis. The upper part of the board is divided into 37 boxes separated by small copper partitions (each of these boxes has a number from 0 to 36). To give this cylinder a rotational movement, simply push (in one direction or the other) one of the four balls of the central crosspiece. So the croupier, using 2 copper branches in the shape of a cross placed in the center of the cylinder gives it a rotational movement. Immediately afterwards, he launched into a gallery located above the movable plate, and in the opposite direction to the movement of the wheel, a ball formerly made of ivory, today made of synthetic material. At this moment, the croupier pronounces twice the traditional words: "Messieurs, faites vos jeux" (once to start the game, another time to stimulate the players when launching the ball). This invitation launched by the dealer is an invention of François Blanc, the father of French roulette at zero. Become sacrosanct, no one would dare to modify it even when there are only women around the gaming table. 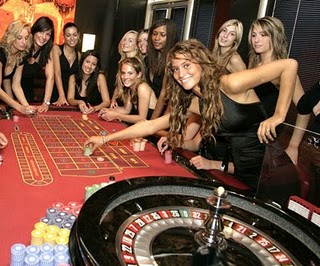 It is true that at the beginning women were not admitted in the gaming rooms. We quickly realized that their presence was essential, for two major reasons: women exalt players and they are even more relentless than men.

This parenthesis made, let us return to our ball which, animated with a sufficient speed, is pressed against the wall of the track by centrifugal force. The rotation of the cylinder is practically uniform throughout the movement of the ball (because the friction is very low, and the mass of the cylinder quite considerable). On the contrary, friction soon brakes the ball: the centrifugal force no longer overcomes gravity, the ball has a spiral movement and collides with obstacles; (at this time you hear the claim "rien ne va plus" and from that moment no one is allowed to bet); it then falls along the track and the circle of numbers, eventually climbs back onto the bell and, after several oscillations, is placed in one of the 37 boxes. As soon as the ball is housed in a box, the croupier brakes the cylinder so that everyone can check the winning number and proclaim the result by declining the number released as well as all the simple chances to which it belongs. For example: "le 27, Rouge, Impair et Passe". Then there is a sweep of losing bets and payment of winnings. In the event that the ball is thrown irregularly, leaves the cylinder, or if a token falls in the latter, the dealer announces "rien ne va", then it resumes the process at its beginning.

As you can see, the conditions required for "making chance" are fully satisfied: symmetry and adjustment of the device, mixing of the numbers, double movement in the opposite direction, obstacles, descents and lifts, zigzags, twists and turns. All of this is too complex to be planned or effectively managed. Any player, who would keep some concern on this subject, would have only to drop the ball from the top of the track, in front of a number of the stationary cylinder: not only, one never catches the number targeted, so to speak doesn't even have a 50/50 chance of reaching one of its four right neighbors or one of its four left neighbors. Let us assume, to clarify a little more, that the target number (stationary cylinder; ball dropped without speed, well in front, between two obstacles) is zero. Under these conditions, there is substantially a nine in ten chance of reaching one of the neighbors of zero, that is to say one of the seventeen numbers (between 22 and 25), which are in the northern portion of the cylinder.

It is a beautiful fable to believe that in normal operation (rotating cylinder, ball launched with the usual speed), a skilful croupier could make fall the ball in the region of the cylinder which he would like!

Number arrangement in the cylinder

With the exception of zero, any roulette number has 3 properties:

How are the numbers arranged on the cylinder?

The order of the numbers in the cylinder, unlike that of the table, is not increasing. In fact their arrangement obeys a perfectly balanced distribution which was the subject of scholarly calculations before this result was obtained. If we divide the cylinder of the roulette wheel into two equal parts on each side of a vertical axis which would pass through zero, and would end up between 5 and 10, we obtain an equal distribution of all chances, on one side as the other. There are as many numbers belonging to each of the sixains, each dozen, each column and each of the single chances. We note that except for the transverse ones where there is not really irregularity, but rather complementarity, the perfect balance between these two half of cylinder is achieved. Therefore, the zero which does not belong to any single chance, to any dozen or columns, to any transverse or to any sixain, is located at the exact point where the balance of all chances is made. If one wants to consider the transversals of zero (0,1,2) and (0,2,3), one realizes that there also one finds them each once in each of the parts of the cylinder.

Does this provision matter? No, since mechanically the roulette is well designed and even a distribution in half red and half black would not change the randomness of ideal roulette. However, if a few minor balancing or roughness faults would favor a portion of the cylinder, this arrangement would mitigate the effects.

On the table placed horizontally and commonly called Tapis Vert, we find all the numbers of the cylinder. However, they are arranged, this time, in ascending order and on three columns, on each side of which is the "strip", that is to say the three simple chances: red, odd and 1 to 18, facing their opposite: black, even and 19 to 36.

The betting table allows you to play for any of the 37 numbers with various possibilities of application. We will review them:

Whatever the odds, the player always has the option of placing his bet (s) on the mat himself or entrusting his chips to one of the croupiers so that he can do it for him. This last way of proceeding is strongly advised to the players betting a large number of coins on the different chances because, by doing so, they protect themselves against any dispute (it falls within the attributions of each croupier to remember very precisely the stakes which have been entrusted). The "announcements" fall precisely within the framework of the stakes which are almost systematically entrusted to the croupiers. They can be classified into two categories:

Every roulette table sets a betting unit, which is the lowest amount that can be bet on both multiple and single odds. In addition, gambling houses usually set a maximum for each of the odds. Usually, the maximum bet is set at:

Payments to winning players and cashing out of lost masses must be made by the centre dealers. They remove the stakes lost by the players before paying out the winning wagers. According to French regulations, payments must be made in the following order: columns, dozens, simple odds, crosses, squares, horses and lastly full bets. 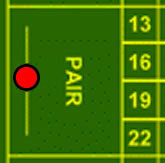 To signal that a bet is "en prison", it is placed on the line within simple luck.
In this case, the player has the option of either leaving his bet locked until the next move or splitting with the banker, provided that the amount is equal to twice the minimum allowed at the table. It is also allowed to pass this bet (still locked in) on the opposite single chance. On the next move, if the single chance of this bet is won, it is simply released. Otherwise, it is permanently acquired by the bank. It can also happen that the zero comes up a second time in a row. In this case, it will take two equally consecutive exits of the played luck to obtain the release of the stake. Although this is extremely rare, it should be noted that if the zero is repeated three times in a row, all the bets of the simple odds are definitively lost.